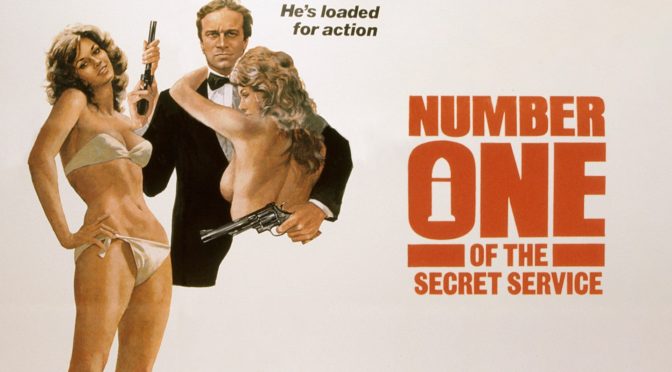 No. 1 is fearless, irresistible, and licensed to kill… remind you of anyone?

With the release of the 25th James Bond film, No Time To Die, we thought we’d follow in the footsteps of For Y’ur Height Only and Never Too Young To Die by screening another Bond-ploitation film. This time, it’s No. 1 of the Secret Service aka Her Majesty’s Top Gun!

Starring Nicky Henson (Psychomania) as secret agent Charles Bind, this is a full-on James Bond parody that tries to throw every gag and double-entendre at the audience in order to please!

Made in the era of Roger Moore’s James Bond, the campiness is cranked up to 11 and the exploitation factor is high.

A sequel was released in 1979 under the title Licensed to Love and Kill with Gareth Hunt replacing Nicky Henson who had decided to escape B-movie hell and join the Royal Shakespeare Company.

No. 1 is fearless, irrestible, and licensed to kill. No. 1 is assigned to capture a madman killing international financiers. Before getting the bad guy, No. 1 encounters mercenaries from the evil organization K.R.A.S.H. (Killing, Rape, Arson, Slaughter, and Hit).

Tickets: £5 (all profits going to Next Link Housing)

IN LIGHT OF THE COVID-19 OUTBREAK, THIS EVENT HAS BEEN CANCELLED.

“Regardless of its intentions or ability, (No.1 of the Secret Service) is 90 minutes of pure joy. Despite its inability to raise a genuine laugh, its need to please is so evident that you can’t help but be swept up in the onslaught of convention-bending sequences that unfold before you in an exquisite collage of camp and cool.” Total Cults: How To Love Movies You Probably Shouldn’t