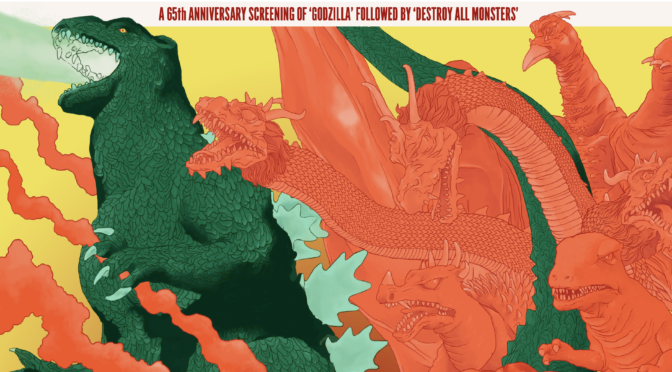 To celebrate the 65th anniversary of the release of Godzilla (1954) and the release of the latest film Godzilla: King of Monsters, we are doing a special Kaiju double bill of the original Godzilla and Destroy All Monsters!

This legendary film is one of the great classics of cinema, from noted director Ishiro Honda, a friend and collaborator of Akira Kurosawa. Made in 1954, Godzilla was one of Japan’s biggest budget features, costing ten times as much as the average Japanese movie and twice as much as the same studio’s Seven Samurai which was released the same year. Takashi Shimura stars as the revered palaeontologist who uncovers the horrible secret at the heart of the monster (Godzilla is a long dormant Jurassic beast awoken by the atom bomb). A fierce indictment of the atomic age, Godzilla was an enormous hit for the Toho film studio, creating a legendary monster that entered the lexicon of popular culture worldwide, spawning more than twenty sequels over fifty years, countless rip-offs, and a new genre: the kaiju eiga or Japanese monster movie. Still rated amongst the top twenty Japanese movies of all time, the original Godzilla is perhaps the definitive monster movie – both a bold metaphor for the atomic age and a thrilling tour de force of pioneering special effects.

From a lunar base of operations, the female Kilaaks lead by their Queen (Kyoko Ai) attach electronic collars to the monsters gathered on Monsterland on the planet Earth. The frenzied females wish to take over the world and unleash Godzilla on New York, Rodan on Moscow, and Mothra on Beijing. The terrible trio are joined by Baragon, Anguirus, Manda, Varan and Kumonga in their romp to ruin the major cities of the world. After the monsters have wrought their terrible destruction, things are brought under control by the humans. The invaders send King Ghidorah in an attempt to rule the world. The monsters congregate at Mount Fuji for an all-star spectacular bout of memorable monster mayhem in this classic science fiction spectacular.

PLUS: All films will be introduced by Tom Vincent, archivist at Aardman Animations and Bristol’s premier Godzilla fan.

THIS EVENT IS RATED ‘PG’

What are the timings for the night?
The first film, Godzilla (1954), will be starting shortly after 6pm following an introduction. There will be a 15 min break between each film.