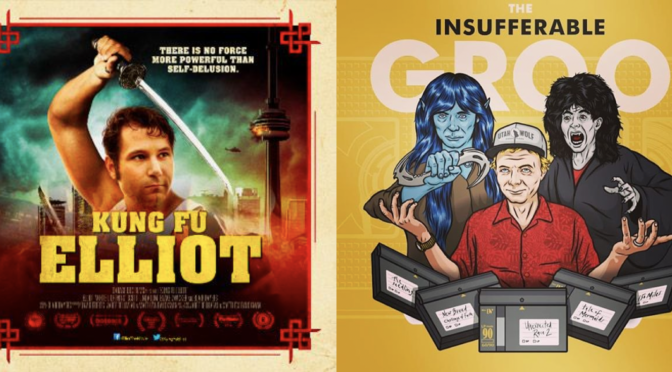 We’ve got a ‘Delusional Director Documentary Double Bill’ as we take a look at the methods and the madness of two very passionate, yet seemingly talentless, film-makers.

Join us for this special documentary double-bill that will be just as crazy and surprising as the films we usually show as we walk and trip over the line that separates creative genius and genuine delusion.

The Insufferable Groo (2018): After 20 years and 205 films, DIY eccentric oddball filmmaker Stephen Groo tries to make it big as he attempts to get one of his Hollywood fans, Jack Black, to be in his newest elf/ human love story film ‘The Unexpected Race.’

Tickets: £7 (all profits going to The Rainbow Centre for Children)

“Roundhouse kick Kung Fu Elliot to the top of your must-see list.” – The Hollywood Outsider

“Ultimately Kung Fu Elliot is a case study of how people often live the story they have in their minds, not the one that reality and fate have brought them.” – The Toronto Star

Praise for The Insufferable Groo:

“If anything, The Insufferable Groo will make you reconsider your commitment to whatever your passions are.” – Film Threat

“An endearing and often funny profile of an amateur filmmaker who’s equally as inspiring as he is narcissistic.” – Film Inquiry

“Groo’s body of work makes Tommy Wiseau look like Tarkovsky as he shows little regard for continuity, coherence or convincing performances.” – Screen Daily