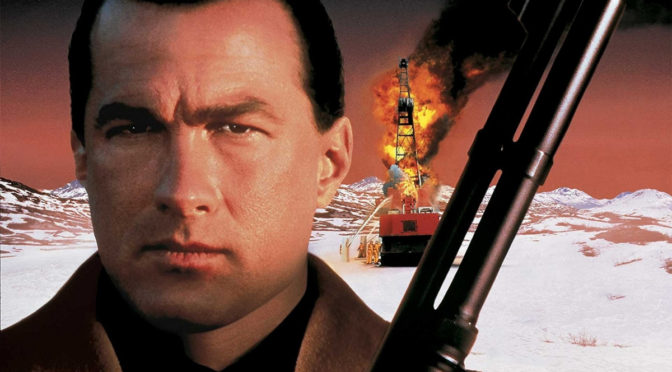 Steven Seagal battles Michael Caine in his (to date) only directorial effort to stop oil companies destroying the Alaskan ecosystem!

“The wait for a decent movie makes you desperate, and I got desperate to the point that I accepted a picture in Alaska with Steven Seagal. The movie was called On Deadly Ground and the title was to prove apt.”

That is Sir Michael Caine being delightfully honest about how he ended up in the directorial debut of Steven Seagal who, after the success of Hard To Kill and Under Siege, was even more of an ego-maniac then he was already famed for being.

This eco-thriller sees the Akido ‘expert’ take on Caine’s evil oil industrialist to save the Alaskan wilderness single-handedly!

The film also stars John C. McGinley (Platoon, The Rock, TV’s Scrubs) and Sven-Ole Thorsen (Conan The Barbarian, Predator) appears as Caine’s main henchmen and the film will be preceded by Bristol Bad Film Club founder Timon Singh reading from his book Born To Be Bad: Talking to the greatest villains in action cinema about Sven’s experiences on this film and his clashes with Seagal!

We are excited for our first event at Curzon Cinema and Arts in Clevedon and can’t wait to bring Seagal’s ‘classic’ to the beloved venue!

The roughest of Alaska’s oil-rig roughnecks, Forrest Taft (Steven Seagal, also making his directorial debut) specializes in fighting oil-well fires. Yet he faces an even more incendiary battle against renegade Aegis Oil president Michael Jennings (Michael Caine). Aegis has put profits over environmental safety. And that puts Taft, a Native Alaskan activist (Joan Chen) and anyone else opposing the company on its hit list.

But Taft hits back, using the martial arts, survival and explosives skills he learned as a high-level CIA operative. Going one-on-one or one-on-20, Taft lets the Aegis bullyboys know where they stand: mess with the land he loves and they’re On Deadly Ground.

“This is a vanity production parading as a social statement.” – Variety

“They may have to write a new book of Ecclesiastes to account for this one: the old “Vanity of Vanities, All is Vanity” just doesn’t go far enough.” – The Baltimore Sun

“As a performer, Seagal is singularly lacking in grace and charisma. As a director, he more than lives up to his ham-fisted acting.” – TV Guide