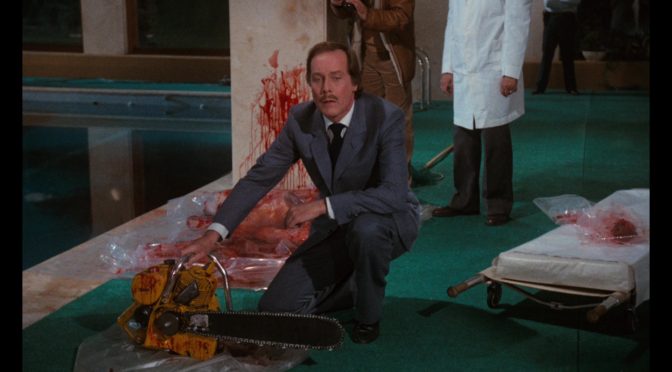 Pieces: You don’t have to go to Texas for a chainsaw massacre!

After the success of our festival screening of Don’t Open Till Christmas, we thought we’d break out another horror nasty from the inept producing partnership of Dick Randall and Stephen Minasian for another highly marketable exercise in early 80s blood and guts.

Not just that, but Pieces also stars Edmond Purdom (who directed Don’t Open Till Christmas and starred as Inspector Harris).

The plot is so simple, we can’t believe you even want to know, but it sees a Boston college campus being terrorised by a black-clad maniac who collects body parts from his unfortunate co-ed victims. As the corpses (and red herrings) begin to pile up, can Professor Brown (genre veteran Jack Taylor) unmask the murderer before his morbid puzzle is complete?

The film naturally contains some outrageously gory set-pieces, but the film’s holy trinity of bad acting, bad dialogue and bad direction has made Pieces a cult classic and one of the most beloved ‘so bad, it’s great’ horror films.

The co-eds of a Boston college campus are targeted by a mysterious killer who is creating a human jigsaw puzzle from their body parts.

Tickets: £5 (all profits will be going to Great Western Air Ambulance)

THIS FILM IS RATED ‘18′ FOR GRATUITOUS LEVELS OF VIOLENCE, GORE AND NUDITY

“I fear I would only permanently damage my brain by thinking too hard about all the things that don’t make sense in this movie… but gosh darn it, we can love a movie like this AND think it’s shit at the same time!” – The Girl Who Loves Horror

“As far as “audience experience” movies go, Pieces is unquestionably one of the finest ever crafted. Seeing a kung fu professor leap out of the darkness just isn’t going to hit as hard from your lonely couch as it does with a crowd of like-minded individuals, all gathered in the dark to take in some serious sleaze.” – Birth. Movies. Death.

“This belongs in the ‘best bad movies ever’ bin. For every mess up in production it has, there are two things that will justify its presence!” – Oh, The Horror!