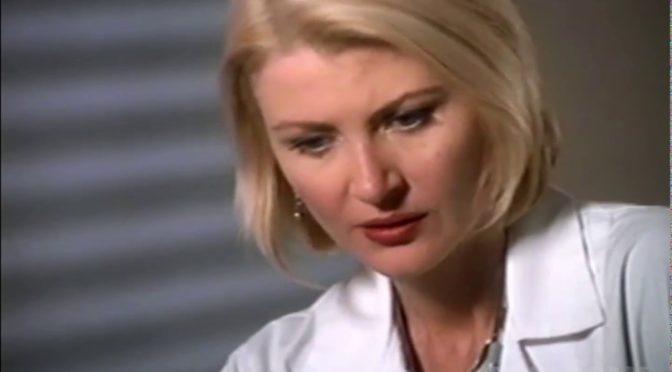 Her biological clock kept ticking… and then it exploded!

During the late 80s and early 90s, Delta Burke was the star of the hit sitcom Designing Women for which she was nominated for two Emmy Awards. However, after shit-talking about the show’s producers, she was let go and entered a wilderness period of her career where she was made some dubious creative choices.

Co-starring Beth Broderick (Aunt Zelda in the original Sabrina The Teenage Witch) as Dr Eva Warden, Maternal Instincts sees Burke play Tracey, a woman who is desperate to have a child. Eva performs a surgery on Tracey, only to find out that she has cancer and to save her life is forced to do a hysterectomy.

When Tracey wakes up and realizes that her chance of becoming a mother is forever gone, she’s utterly distraught, and although her husband suggests an adoption, it’s not a possibility for Tracey. When her sorrows’s over, anger get’s the upper hand and Dr Warden unawarely becomes the target of Tracey’s wrath.

As one would expect from a movie that makes a ‘Bad Film Club’ screening, this sensitive topic is dealt with all the nuance and subtly of a bull in a china shop.

As such, please be advised that this ridiculous film badly covers themes of infertility, infant loss and IVF journeys.

As with many of the aspects of the film, these subjects may not be handled with the greatest of care and so could be distressing for people who are facing issues around reproduction and or infant loss.

A pregnant doctor’s life is made hell by the deranged patient to whom she gave a hysterectomy, without the patient’s consent.

Tickets: £5 (all profits will be going to a local charity which support families through depression and anxiety related to birth, but who has asked not be named because of the insane nature of this film. Understandable.)

“It looks like Burke is having the time of her life slinging wrenches, pushing shopping carts into pregnant women and running down good looking architects.” – Made For TV Mayhem

“If it is a spoof – if everyone on set had a good time making it and the writers and the director really got a kick out of creating this film – then I think it’s wonderful. If this was a serious effort, though, if Burke, say, spent six months in a psychiatric ward in order to find her character’s emotional center and then stayed in character even during meal breaks and off set, then I still think it’s wonderful. Just in a different way.” – Seaswell