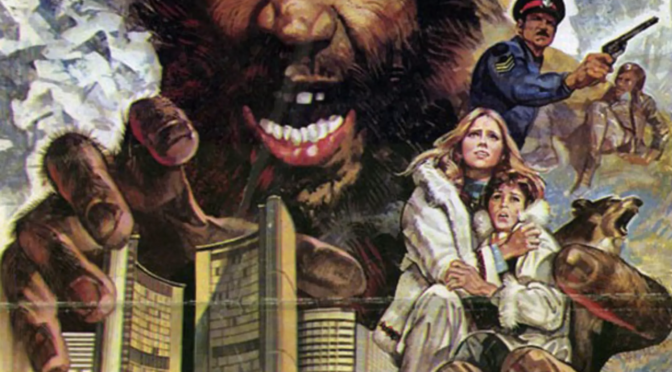 “So Big! So Strong! But So Gentle! You Will Learn to Love Yeti!”

When Dino DeLaurentiss released his remake of King Kong in 1976, it became a smash hit, earning $90 million worldwide!

Inevitably ,there were a number of giant ape knock-offs that were rushed into movie theaters in an attempt to cash in on its success, such as A.P.E and Mighty Peking Man. However, none compare to Yeti – Il gigante del 20º secolo (aka Yeti il gigante del XX secolo) from Italian director Gianfranco Parolini, who used his American-ized pseudonym, Frank Kramer!

The film has everything! An environmental message, sleazy Italian men trying to win the heart of the film’s heroine, a Yeti that looks like a mixture between a homeless Jesus and an orangutan, and there’s a bit with a dog! Yay!

Don’t miss out on this film! It may look like a cheap Italian King Kong rip-off, but it’s guaranteed to surprised you and take you on an emotional rollercoaster!

The version shown will be an English dubbed version of the movie!

Professor Wassermann (John Stacy) is asked by industry magnate Morgan Hunnicut (Eddie Faye) to lead an expedition to study the giant Yeti creature found frozen in a large ice block on Newfoundland’s coast. The professor does not know that Hunnicut intends to use the prehistoric creature as a trademark of its multinational industrial group. A very big mistake.

Tickets: £5 (all profits going to The Rainbow Centre for Children)

“For all the many flaws, Yeti is terrific fun, the script is an absolute doozy and everyone plays their parts completely straight, on the off-chance they’re appearing in a breakout hit. The film genuinely deserves a retrospective release for cheese value alone and as a reminder that you can make a film that succeeds purely through sheer exuberance and fun.” – Horrorpedia

“The monster is played by an extremely expressive actor in a fur suit with a puffy head of Tina Turner hair… As a cherry on top there’s an indescribably loony theme song that takes things to the upper echelons of schlock.” – Dread Central

“Sometimes the Yeti is the size of a building, other times he’s not… but this is still more believable than the plot!” – Dark Corners