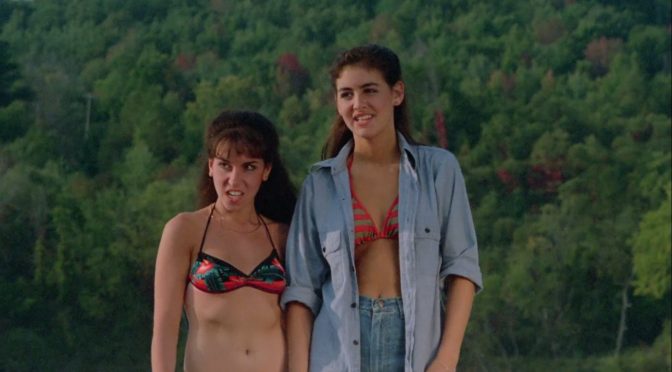 “A nice place for summer vacation – a perfect place to die!”

As the summer comes to an end, why not kick off your shoes and dip your toes in the crisp waters of the lake as we visit the cult horror classic Sleepaway Camp!

Released in 1983 when the slasher movie was at its peak thanks to the likes of Halloween and Friday the 13th, Sleepaway Camp is lauded in cult film circles for its creative deaths, shocking revelations, weird script and bold acting choices!

Once you see it, you’ll be unable to un-see it!

Angela Baker, a traumatized and very shy young girl, is sent to summer camp with her cousin. Shortly after her arrival, anyone with sinister or less than honorable intentions gets their comeuppance.

“The story of Sleepaway Camp is pretty much everything you’d expect from a slasher movie and nothing you’d ever expect, which is what makes Hiltzik’s campy and disturbing summer camp tale still one of the more memorable horror movies ever made.” – Daily Dead

“An atypical slasher movie that blurs the lines between high and low art, good and bad acting, male and female, proficiency and ineptitude, sophistication and primitivism.” – Daniel Barnes, Dare Daniel

“Sleepaway Camp belongs to a pool of slasher films known for their generic prolificacy; it must be noted that it is one of the first and best.” – Not Coming To A Theatre Near You