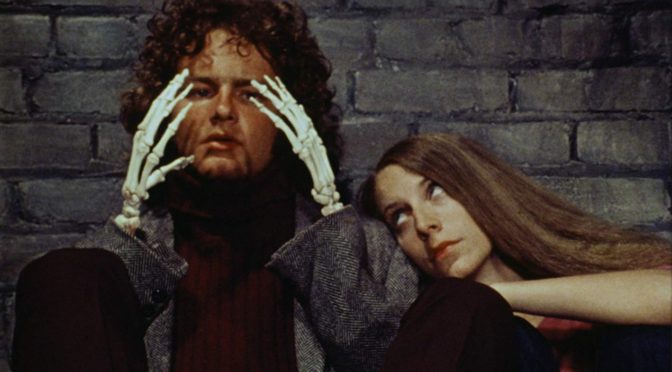 Celebrate Halloween with a screening of a cult horror classic and a ‘horror mixtape’ from some of the strangest horror films out there!

Director George Barry was a man with a vision. That vision? A bed that eats people.

That idea, which unsurprisingly was the result of a nightmare, prompted Barry, who had no background in film-making, to turn it to an actual movie – Death Bed: The Bed That Eats!

For five years, Barry scrounged together a meagre budget and shot parts of the film whenever he could. He finally finished it in 1977, but due to a lack of distributor interest, Barry moved on with his life and the film disappeared into obscurity. Cut to the early 2000s and Barry discovers his little film has built up a cult following with VHS bootlegs making their way around Europe.

In 2003, the film was finally released on DVD, gaining even more notoriety when comedian Patton Oswalt did an entire rant about it on his album Werewolves and Lollipops, the world was finally able to enjoy George Barry’s singular vision about a flesh-eating bed in all its glory… and this Halloween, we’ll be screening it!

PLUS: The main feature will be preceded by The Neon Slime Mixtape, a compliation montage of the craziest clips from the weirdest horror films compiled by The American Genre Film Archive and Bleeding Skull’s Joe Ziemba.

NEON SLIME MIXTAPE: Neon and slime are more important in life than sleep and hamburgers. So it’s only natural for AGFA and Bleeding Skull! to team up with life’s most essential ingredients to deliver a mixtape that’s more essential than life itself. THE NEON SLIME MIXTAPE is a hallucinogenic compilation that celebrates gore-soaked, gloop-drenched, direct-to-video genre anarchy from the 1980s and 90s. Coked-out demons! Extraterrestrial aerobics! Barbie dolls that kill!! Featuring digest versions of our favorite DIY slimers, ultra-rare trailers, and unseen clips from beyond the otherverse, THE NEON SLIME MIXTAPE will rip off your head and blast your spirit through the cosmos — and that’s only the first fifteen minutes.

DEATH BED: THE BED THAT EATS: A long-ago failed seduction results in a demonically possessed four-poster that consumes lovers.

“Purportedly unseen by more than two dozen people since it was finished in 1977, zero-budgeted “Death Bed” is a horror flick destined for some small place in the hearts of psychotronic fans who already treasure such extreme oddities as “Blood Freak.” Horror fests and cult-vid distribbers are advised to get between the sheets.” – Variety

“Death Bed: The Bed That Eats is a major classic in the what-were-they-thinking school of horror.” – AllMovie.com

“Death Bed is a major accomplishment in the annals of strange cinema. Imagine Roger Corman’s legendary Edgar Allan Poe adaptations, but laced with nitrous, barbiturates, and an inhuman experimental synthesizer score. Calling the film surreal is too easy. In fact, thanks to the crude, psyched-out techniques and coulda-been-a-great-urban-legend plot, Death Bed floats in the upper echelon of disconnected films that must be seen . . . just to be certain that they actually exist.” – Bleeding Skull