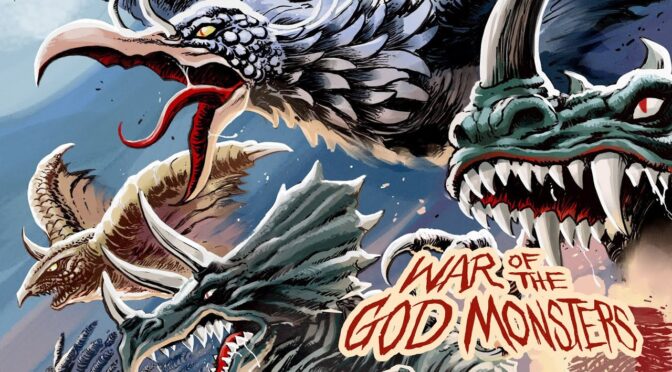 “The Cruel Jaws of Kaiju movies”

A previously lost 1980s kaiju film from Korea, now newly restored! A young reporter named Kang Ok-hee is writing a story about the theories of Dr. Kim, a scientist who believes that dinosaurs still exist in the modern world.

WAR OF THE GOD MONSTERS that was released in its native country as THE UNDEAD BEAST (비천괴수, Bicheongoesu) and marketed internationally as THE FLYING MONSTER (飛天怪獸, Hiten Kaiju).

When gigantic creatures suddenly appear and cause massive destruction, the doctor and journalist must find a way to save the world. Utilizing footage from various Ultraman series, WAR OF THE GOD MONSTERS is an unhinged — and delightful — monster mash-up.

“Unequivocally, “War of the God Monsters” is one of those monster films that steals some of the finest kaiju footage from Japanese productions and inserts their own actors and crummy storyline into the mix. It’s an exercise in, most likely, thievery and laziness in the highest order.” – Daikaiju Network