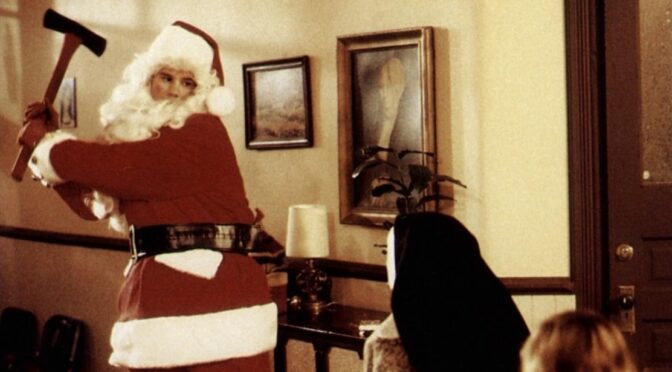 Community leaders tried to stop it. The P.T.A. fought to ban it. Now, one of the most controversial slasher films of all time is back in a new restoration from the original camera negative.

SILENT NIGHT, DEADLY NIGHT is the demented story of little Billy Chapman, traumatized by his parents’ Christmas Eve murder and then brutalized by sadistic nuns in an orphanage. When Billy grows up and dresses as Santa, he goes on a yuletide rampage to punish the naughty with extreme prejudice.

Robert Brian Wilson and Linnea Quigley (NIGHT OF THE DEMONS) star in this harrowing horror classic that continues to ruffle the feathers of angry parents and stuffy critics over thirty years later.

Little Billy witness his parents getting killed by Santa after being warned by his senile grandpa that Santa punishes those who are naughty. Now Billy is 18, and out of the orphanage, and he has just become Santa, himself.

THIS EVENT HAS BEEN CANCELLED

“I would like to hear the filmmakers explain to their children and their grandchildren that it’s only a movie.”– Roger Ebert

“This was obviously not new territory for the slasher genre, mind you, but Silent Night, Deadly Night brought the idea to new levels of cold sleaziness.” – Slant Magazine

“We’re not knocking the transformation of a hallowed holiday figure into a homicidal maniac…it’s the pleasure Billy and the movie take in leering at, then dicing up young women that lands Charles E. Sellier Jr.’s sicko Santa on our worst list.” – Time Magazine