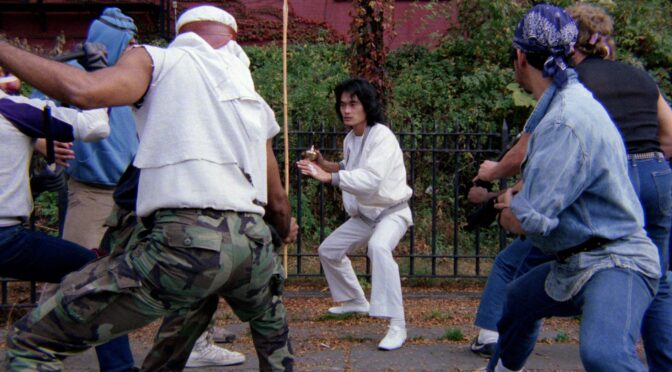 Prepare to kick off 2022 with a ninja film long-thought lost!

Originally directed by & starring martial arts actor John Liu in his only American movie, and produced by legendary New York exploitation producer Arthur Schweitzer, New York Ninja was filmed entirely on 35mm in 1984, but the project was abandoned during production resulting in all original sound materials, scripts, and treatments going missing.

Restored in 4K from the original camera elements, New York Ninja is “finally available in all of its ridiculous over-the-top glory for the first time ever… after spending nearly four decades in film obscurity.

John is just an average man working as a sound technician for a New York City news station, until one day his pregnant wife is brutally murdered after witnessing the kidnapping of a young woman in broad daylight.  Turning to the police for help, John soon learns that the city is overrun with crime and the police are too busy to help.  Dressing as a white ninja, John takes to the streets as a sword wielding vigilante hell bent on cleaning up the streets of the city he once loved by ridding it of muggers, pickpockets, rapists, and gang members.  However, in John’s quest for justice, he soon finds himself the target of every criminal in the city, including a mysterious villain known only as the Plutonium Killer.  Will John survive to become the hero that New York City so desperately needs?

“From the opening credits of New York Ninja, you already know this movie will be a ride. The campiest of heroes, the zaniest of villains, and the grimiest you’ve ever seen New York? Absolutely brilliant. Rarely does a movie ooze creativity and style in the manner New York Ninja does. You can feel the shoestring budget through the screen, but what they did with what they had was immaculate.” – Full Circle Cinema

“New York Ninja is the kind of gem that demands viewing with a crowd. This is the reason we go to the cinema in the first place, to be a part of something special, to commune with our film-loving families and share not just a movie, but an experience. New York Ninja is one hell of an experience, an ecstatic fever-dream of a film that you will want to shout about from the rooftops.” – Screen Anarchy