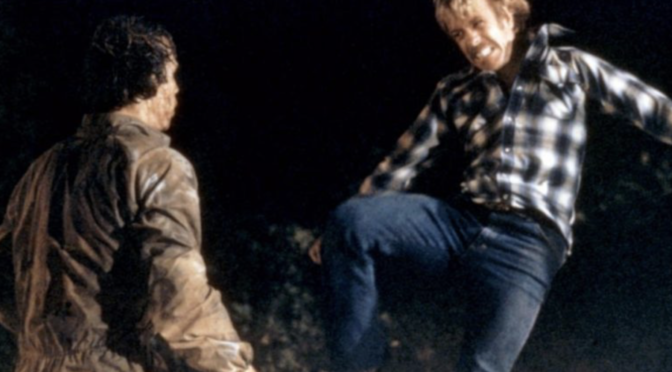 “Science created him. Now, Chuck Norris must destroy him!”

As the Forbidden Worlds Film Festival is celebrating the year ‘1982’ to celebrate the 40th anniversary of 20th Century Flicks, we thought that we’d likewise mark the year with this Chuck Norris curio.

In this cult-action-martial arts-neo-sci-fi-slasher-noir, Chuck Norris’ sheriff must stop a modern-day Frankenstein’s Monster – a mentally ill man who has been granted near-indestructibility thanks to a medical experiment.

Also starring Timecop‘s Ron Silver, this weird sci-fi/slasher/martial arts movie is a must-see B-movie mash-up. Plus it has the added distinction of featuring a couple of sex scenes from action cinema’s most conservative star.

A scientific experiment goes terrifyingly wrong… and only one man has the power to stop it.

“Imagine Chuck Norris squaring off against Frankenstein’s monster and you’ve got a pretty great idea of what you’re in for.” — Cinapse

“(The ending) means there probably will be a sequel. It is a terrible thought.” – The New York Times

“Any movie with a tagline like “Science created him. Now, Chuck Norris must destroy him!” demands any action-exploitation fans undivided attention.” – Cool Ass Cinema