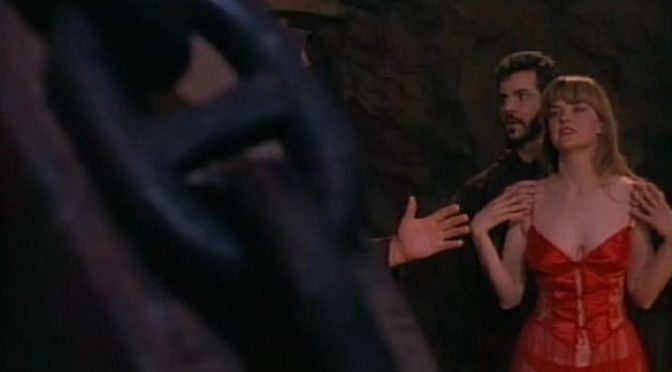 Devil worship! Demons! Martial arts! It can only be the unique vision of actor/director Steve Barkett!

Reminiscent of John De Hart’s GetEven, but dialled up to 11, Empire of the Dark is a unique passion project in the tradition of The Room, Samurai Cop and Miami Connection.

Writer/director/editor/producer and star Steve Barkett stars as bounty hunter beefcake Richard Flynn who dispatches a cabal of satanists that have sacrificed his girlfriend Angela (Tera Hendrickson). Twenty years later, Flynn is shocked to learn that the cult’s leader Arkham (Godfrey Ho’s muse Richard Harrison) has somehow survived and is now linked to a mysterious series of ritual killings. Teaming up with an enigmatic young man (played by Barkett’s real-life son Christopher Barkett), Flynn descends into hell to battle the forces of evil!

Employing an incredible roster of talented visual effects artists, such as Academy Award winner Robert Stromberg (Avatar, Maleficent), who conjures up a series of jaw-dropping matte paintings and miniatures throughout the film and enveloped by an exceedingly melodramatic score and peppered with delirious optical effects and endearing stop-motion monsters, Empire of the Dark is a like no other film you’ve ever seen!

This screening is guaranteed to sell out, so get your tickets now!

A private detective searching for a killer comes across a satanic cult from another dimension, monsters called up from hell and murderous ninja assassins.

“Non-stop action… Steve Barkett isn’t going to win any acting awards for sure, but goddamnit, he is entertaining as hell.” – Video Junkie

“Empire of the Dark is a trampoline of a movie, repeatedly reaching its ambition before hilariously tumbling down into sublime silliness.” – Laser Blast Film Society

“When Red Letter Media reviewed it on Best of the Worst the word ‘adorable’ cropped up repeatedly, and now I know why. It is adorable. It’s like watching a puppy trying to walk on a slippery surface. You’re left admiring its determination and laughing at its failure. Empire of the Dark is a spreadeagled puppy of a movie scrabbling to get up on its feet.” – Bad Movie Bible