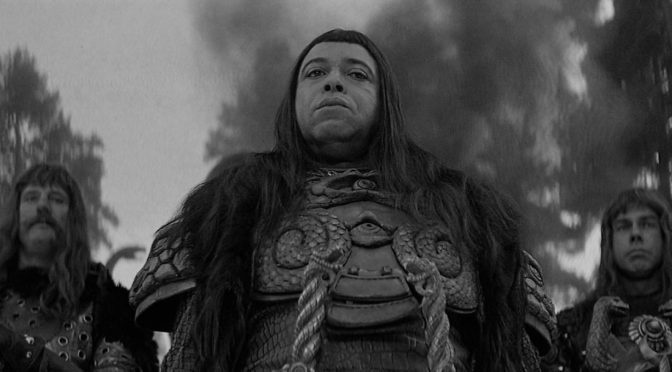 For Born To Be Bad, Timon Singh spoke to champion bodybuilder and strongman turned stuntman Sven-Ole Thorsen, who holds the distinction of being killed on-screen by his good friend Arnold Schwarzenegger more times than any other actor!

Looking at Sven-Ole Thorsen’s filmography is like looking at
a list of the greatest action films ever made; Conan the Barbarian, The Running Man, Lethal Weapon, Predator, The Hunt for Red October and Gladiator.

In this extract from Born To Be Bad, we talked about his first major role as Thorgrim in Conan The Barbarian.

How did you get cast as Thorgrim?

I had been in Los Angeles during the late seventies for a martial arts world championship in Long Beach and I’d hung out with Arnold. He said to me, ‘I have to go and see a director who wants to do a movie called Conan The Barbarian. I want you to come with me.’

We went and when [director] John Milius saw me, he was really impressed by my size and that I came from Denmark. He saw me as some kind of Viking! He was writing the screenplay at the time and said, ‘I need a good strong name. Give me a good strong name for a character in this picture.’ I said, ‘What about Thorgrim?’ He loved the name and six months later he called me and said, ‘Hey, Sven. I want you to play Thorgrim in Spain. Get your biggest friends. We’re going to put you all in Conan the Barbarian.’

So, I picked ten big friends, all weightlifters, and we went down to
Spain. We were called The Animals! There were ten big guys from Denmark, ten American stuntmen and ten Spanish stuntmen – thirty guys, so of course there was a lot of competition between us and John ended up using us for most of the stunts in Conan the Barbarian.

It’s a hell of a film for your first movie role. It must have been an amazing experience.

I’d done a couple of small movies in Denmark as a henchman, but [Conan] was an experience beyond what you can imagine. It’s playing cowboys and Indians all day long!

Seventeen different locations around Spain, eating great food, great wine, chasing women – having so much fun! Every day on location we were served three course meals, with fruit, cheese, and wine. And of course, there were food fights, so lunch lasted three to four hours! By the afternoon, we were all tipsy!