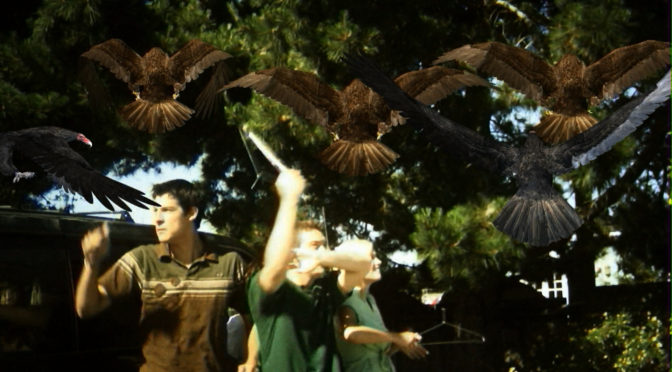 Following the success of our online watch party of VEROTIKA, we’re going to try the same again with Birdemic: Shock and Terror!

We’ve found a way for us to share the film via a Chatroom so everyone can post and engage with the film! (Or rent it via Amazon Prime).

Filmed on a budget of $10,000 and HEAVILY “influenced” by Alfred Hitchcock’s The Birds and Al Gore’s An Inconvenient Truth, director James Nguyen’s infamous film is widely regarded as one of the worst films of all time.

The film revolves around Victoria Secret model/part-time photo developer Nathalie (Whitney Moore) and aspiring environmental software salesman Rod (robot-impersonating-a-human Alan Bagh) who must survive when their small town is besieged by killer eagles – who have been turned mad by climate change.

How global warming has made these eagles cause wildfires, spray acid and explode on impact is unexplained, but it is put down to “the human species playing cowboy with nature.”

The story behind Birdemic: Shock and Terror has only added to its notoriety. It was made with no studio support, largely self-financed and drew internet ridicule for its poor quality and seriously bad CGI.

Nguyen made headlines when he traveled to the Sundance Film Festival to promote the film by handing out flyers to passers-by from his van, which was adorned with stuffed birds and paper signs that read “BIDEMIC.COM” – yes, he spelt the title of his own film incorrectly.

Even the grammar on the flyers was awful. They asked the question “WHY DID THE EAGLES AND VULTURES ATTACKED?”

Word of mouth has made the film a cult classic and if you can believe it, it even got a sequel – Birdemic II: The Resurrection.

A platoon of eagles & vultures attack the residence of a small town. Many people died. It’s not known what caused the flying menace to attack. Two people managed to fight back, but will they survive BIRDEMIC? Why did the eagles and vultures attack?

“Nguyen’s DIY-fingerprints are on every frame. Like The Room, it’s the antidote to mass culture — a singular auteur with a dream.” Amy Nicholson, Boxoffice Magazine

“The acting is uniformly delivered with the flatness of someone who’s taken a handful of anti-psychotic medication.” Jim Slotek, Jam! Movies

“Birdemic appears to be completely sincere, an attempt by Nguyen to make a serious and moving work of art. So what if it moves us to tears with laughter?” Brian Holcomb, CinemaBlend.com