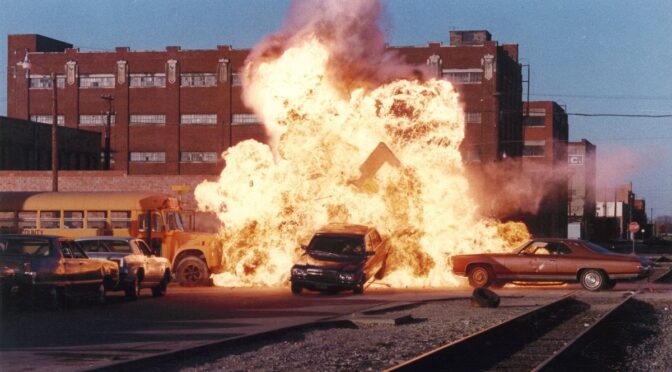 In 1989, a stuntman-turned-filmmaker unleashed the most explosive, death-defying, bullet-riddled, grenade-launching, flame-broiled, anti-human megattack in independent film history and no one knew… UNTIL NOW.

But what if we told you there’s one single movie that impossibly squeezes all of the above into 89 minutes, not to mention sunroof gunfights, a car jumping over a school bus packed with screaming children, honkytonk brawlin’, bathroom kissin’, plus exploding cars, houses AND recreational vehicles?

In the late ‘80s, against all known laws of reality, daredevil-turned-filmmaker John Stewart took to the cities, highways and saloons of Texas and accomplished that very feat. Having cut his teeth handling stuntwork for such features as NEON MANIACS, FERRIS BUELLER’S DAY OFF and HARD ROCK ZOMBIES, Stewart’s directorial debut tears out of the gates with a ferocity never seen before or since in the independent action pantheon.

Under-appreciated character actor Gregory Scott Cummins (best known as ‘Mac’s Dad’ in IT’S ALWAYS SUNNY IN PHILADELPHIA) — who’s played a greasy lowlife 167 times and a good guy twice — is a reluctantly heroic FBI agent tasked with keeping a witness (Barri Murphy) safe after the mob murders her boyfriend (Rod Shaft; no relation to Peter O’Toole). But the route back to federal headquarters is a non-stop barrage of bullets, blasts, and bodies, constantly raising the bar of inhuman wildness until the film’s final second. The mayhem is further enriched by supporting performances from William Smith (MANIAC COP), Cameron Mitchell (DEADLY PREY, TERROR IN BEVERLY HILLS, RAW FORCE), and Ross Hagen (BLOOD GAMES), a who’s-who of B-movie demigods.

ACTION USA takes the grand tradition of self-made two-fisted epics like MIAMI CONNECTION, HARD TICKET TO HAWAII and SAMURAI COP and turns the knob past 11, then snaps it off and jams it in your eye socket. If you’ve ever enjoyed watching any movie in your life besides DOWNTON ABBEY, then this rampaging rager from 1989 will be your favourite film of the 21st century, guaranteed.

After her boyfriend is murdered by the gangsters whose diamonds he stole, a girl is protected by two FBI agents who plan to keep her from sharing the same fate.

Due to concerns about the pandemic, as well as watching the film in person at the Bristol Improv Theatre, we are also offering the opportunity to stream the film live via a unique URL on 19 August.

You’ll also be able to see the film’s intro provided by The Bristol Bad Film Club before the stream switches to the movie! Simply buy a virtual ticket for this option. The programme will still start at 8pm for the live stream!

All tickets (live and virtual): £5

“A lost gem of stunt work from the 80s, Action U.S.A has been saved from obscurity. Do you like car crashes, car jumps, car chases, and plenty of car explosions? Well look no further than this B-movie. Director John Stewart clearly knew what a film called Action U.S.A. should deliver. This is an action-packed cheese fest.” – Dark Of The Matinee

“This movie goes out of its way to live up to its title! This movie’s main concern is car chases, high falls, bar brawls, and explosions. That’s all. You want a story? These filmmakers never heard of it! They just want to overload you with a gratuitous amount of spectacular stunts. And they sure as hell do!” – Ultimate Action Movies

“Action USA starts with a high-speed car ride that transitions to a steamy sex scene, which is then followed by a stunt filled car chase. From there, the film never seems to slow down. Its consistent tempo is a wild ride of everything an 80’s action film can offer and more. In short, Action USA is the epitome of 80’s excess.” – Morbidly Beautiful